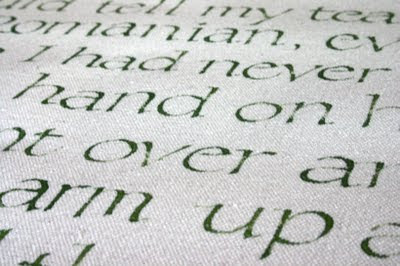 Guidelines are important. For a calligrapher, they allow uniformity, consistency and rhythm while allowing one to concentrate on a variety of other things including the refinement of a particular letterform. In developing skill in writing letters, they are indispensable for learning the techniques needed to become a successful calligrapher. They provide a framework for the structure of the proper, historical letterform.

There is a certain point though, where it is a good idea to abandon the guideline and begin to write freely, not to discard proportion and spacing principles, nor even historical letterform, but to pay attention to what your individual hand is doing with the pen, and also to find a comfort zone in the height and proportion of your letters. 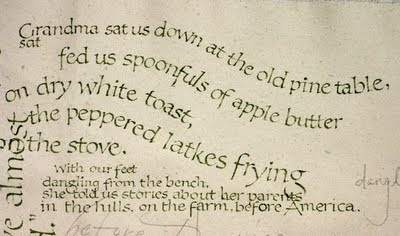 There is a freedom in practice that allows for experimentation and exploration. In practice, rather than trying for a finished product,  I am more concerned with paying attention to new things that may be happening that I can later incorporate into my artwork. Just sitting down and writing for a continuous period of time also has the effect of re-establishing rhythm that may have been lost due to being away from the drawing table... it can become meditative and pleasurable. 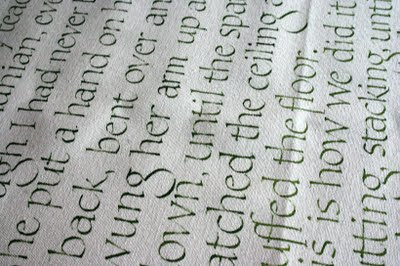 In the examples here I have begun to write a new poem for which I am trying to get a visual feel . For lack of a direction I picked up a pen with a broad edged metal nib and began writing a semi-formal Roman letterform on a scrap of canvas I had in the studio. This more historical form will not necessarily be what I use for the finished product, it was just what began to come from my hand that day...you can see in the first four lines of the example below I am changing size, weight and style to find out what I like. There is no time wasted here because these experiments will prove useful in future work, and there was a certain point where that "rhythm" kicked in and the letters began to become pleasing. Also this work will provide some good texture for background effect as I move farther on this canvas... 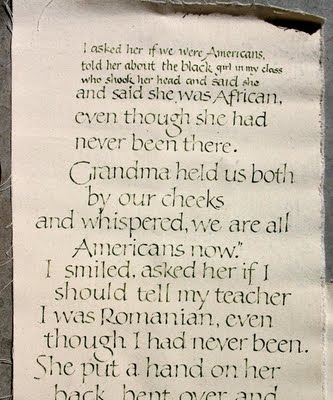 Canvas has a number of benefits for me, not the least of which is that it forces me to slow down significantly in lettering. Drawing a metal pen over unprimed or raw canvas causes the canvas itself to move, and the inks tend to sit up and not necessarily soak in. In slowing down my movements, I then concentrate more of the form of the letter, at the same time allowing my hand to make a natural movement based on the width of the pen nib I selected. 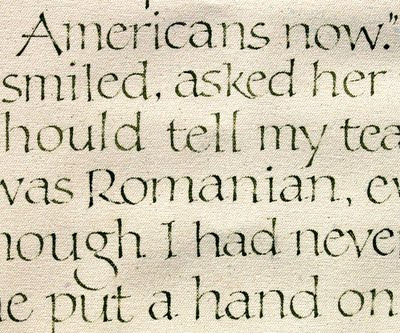 In this type of practice, I am consciously writing letters that I know will eventually be covered over by layers of paint and other lettering... so inside the rhythm I am developing I can work with sizing letters and adjusting on the fly; note for example the last word ("been"), second line from the bottom has two different sized "e"'s and throughout the piece the lettering gets a little larger here and a bit smaller there. What this has done is given me some clues into what my hand tends to "like" in this letter, and I can now pick out the right sized letters and make them "my" height instead of relying on an exemplar's recommendation.


The poem I am writing is a part of my "Baron Journals" project in collaboration with poet Christopher Baron.
Posted by Randall M. Hasson at 1:43 PM