The announcement of the new C.S. Lewis College, and a story

Some few years ago, I was contacted by a company with which I was not yet familiar.

Being a Californian born and raised, I had never heard of Hobby Lobby. For those of you who don't know (and at the time I looked them up), Hobby Lobby is the 3rd largest arts and crafts chain in the United States (behind Michael's and Joanne's). They have no stores or presence, however, in CA.

Hobby Lobby was founded by an individual named David Green. His mother, Marie Green was a 1920's revival preacher.

Hobby Lobby is a store that supports different charities. One of these charities is called "The Book of Hope", which is a world evangelism organization. When the Book of Hope organization needed a new facility, Hobby Lobby stepped in, purchased a vacant building in Florida, and renovated it to become the new facility for this group. They decided to dedicate the building to Marie Green, David's mother... a fitting dedication for an evangelistic outreach. 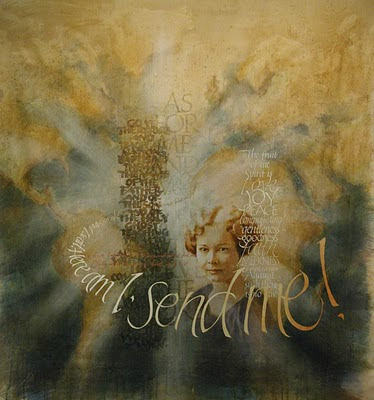 I was contacted in 2004 by Hobby Lobby to execute a "Legacy Commission" for the Lobby of the new Book of Hope* facility. the resulting painting, pictured above, is called "The Evangelist".

After this painting, I was contacted by the CS Lewis Foundation, and discussions began about having me do some work for their upcoming conference in Oxford and Cambridge, England. What resulted from this encounter with the Foundation was my very next painting: "C.S. Lewis, the Spirit and the Man". 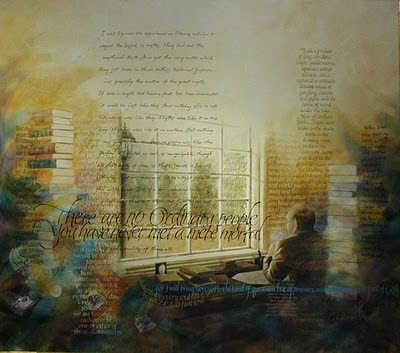 This painting was completed in 2005, in June, about a month before this conference ("Oxbridge" 2005). When one of the scheduled speakers became ill, I was asked to come to Oxford to make a presentation on my painting. The resulting trip was an eye opening experience for me. The attendees were scholars, university faculty, clergy and other interested parties. I was honored and not a little bit humbled to find that the list of mainstage presenters was varied and famous: among them Chuck Colson, Richard Foster, Dana Gioia (acclaimed poet, and Chairman of the National Endowment for the Arts), and Rick Warren.

Frankly, my ignorance served me well on this trip... I made a 15 minute presentation on the second day I was there, before I really knew who else was coming onstage after me... If I had known I would have been too nervous to even walk up on stage!

To be among the faculty, staff and participants was something I will never forget and look forward to attending again.

The C.S. Lewis foundation began in 1972, and among their many goals, two were to a) purchase, renovate and pay off the home of C.S. Lewis in "The Kilns", Oxford, England. The other was to find a suitable facility to begin the dream of founder J. Stanley Mattson... "The C.S. Lewis College".

I had not seen Stan Mattson for some years. I was pleasantly surprised, when I was in California last September, to be invited to the home of a friend for dinner which he was attending. After dinner, Stan told us he had some exciting news.. that they had a probable benefactor for the C.S. Lewis College, but couldn't reveal any more information until the planning was finalized.

I was speechless about a month later, when the email came announcing the news:
That vision is now about to become a reality as plans move forward to launch C.S. Lewis College on the beautiful campus in Northfield, Massachusetts, recently acquired for this purpose from Northfield Mount Hermon School. This property has been purchased for the use of C.S. Lewis College by Hobby Lobby, a privately held retail chain of arts and crafts stores based in Oklahoma City, OK.

Talk about a small world. I am pleased to announce that the original painting, "C.S. Lewis, The Spirit and the Man", will hang at the new college. I feel blessed to be a part of this whole chain of events...

*"The Book of Hope" organization is now called "One Hope"

* After my presentation at "Oxbridge", I was asked by many of the attendees for a copy. I have made that presentation available here.
Posted by Randall M. Hasson at 10:48 AM