I am not a guy who walks by and lingers at the card section... I am usually only walking by to get to some other section of the grocery store. One such day I was stopped in my tracks by a card that just happened to catch my eye... the lettering just jumped out at me and I reached out and grabbed the card. When I went to purchase it, the cashier asked me if I wanted an envelope... "nah, this'll do" I replied. 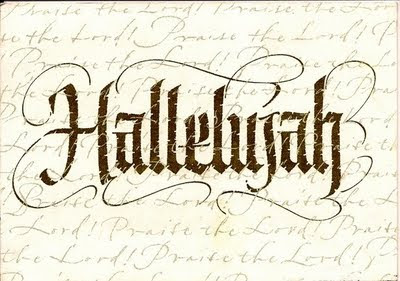 I didn't buy the card to send, but to keep. I was intrigued by the elegance of the letterforms, but also something more specific, the way this artist had used the form of, and had "crossed" the letters "a" and "e" (not normal in this style of letterform). I was also attracted by the texture of the letters themselves, this effect being fomed by the smaller freeform cursive writing being layered across the larger "textura"* style letters. (These elements were to become a springboard or influence for me to develop my own writing style in this hand).
A couple of years later, in Orange County, CA, there was a workshop being offered by a man named Michael Clark. I didn't, at the time, know Michael or his work, but had been recommended to take a class from him from a couple of friends.
Micheal Clark, in short, blew away my preconcieved notions of what "Calligraphy" should be, or rather, how it "should" be done.
As a beginning student, there are so many elements of making letters to learn; "calligraphy" is traditionally thought of as letters made with a broad edged pen, allowing the artist to make thick and thin strokes due to the angle at which the pen is held. These strokes are usually made in a consistent fashion and put together in such a way as to form letters.
Michael didn't worry about this. Pen angles and the order of strokes seemed to go right out the window. He used a tool called the ruling pen to great effect, and didn't care how he got to the letterform, he only cared about the end result. His demonstration was to write a word with a simple stroke... a skeleton of the letters if you will. He then used that ruling pen to add weight and build up the letter where he wanted to. In general, the thicks and thins followed where they would normally be with the making of a letter in a single stroke, but not always! He was drawing... or DOODLING... the letters!
This one demonstration, this man's attitude and his freedom in the love of making letters, was a revelation to me. This first morning of the first day of a two day workshop caused a pardigm shift in my thinking about, and the making of, letterforms.
We took a break, and I was looking thru some of the samples that Michael had brought to show the different letterforms he had created in his career. I purchased his book, and as I flipped thru, there was my HALLELUJAH! This was the guy who had done the lettering to develop that font!
I came to find out that Michael is no rookie in the field of letters... he has won numerous very prestigious type design awards and is extremely well known throughout the lettering and type communities. Some samples of his font designs are below:
(In the selection below of Michael's award winning fonts, you can see that particular letterform on the bottom, called "Sting") 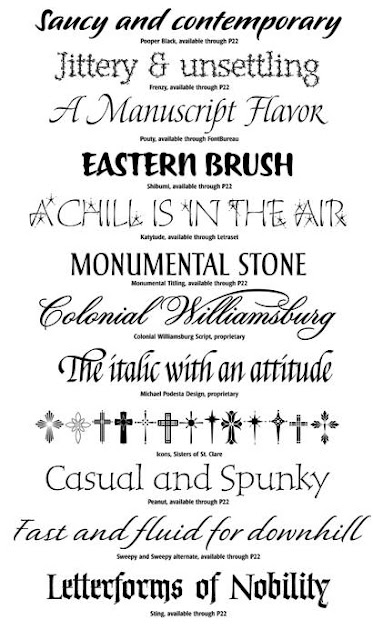 Source: http://www.typerror.com/current6/fonts.html
An immediate result of this weekend was a direct application of the built-up-ruling-pen lettering I had learned onto one of my large format paintings called "To Know His Thoughts".

Randall M. Hasson - "To Know His Thoughts" - (detail) 2002 48" X 60" Acrylic on Canvas
What is the end result of having spent a few short hours with the right kind of teacher at the right time? One word... FREEDOM. This paradigm shift allowed me to think like the person I really am, a painter. This line of thought led me to pick up a broad edged pen and begin, with quick and varied strokes, "sketch" letterforms... a technique I still employ today.
One day, a couple of years before my dad passed away, he was in the hospital and my brother and I drove out to visit him. I happened to have my journal with me, and as we sat in the courtyard at a cafeteria table, I took that broad edged pen and made some spontaneous sketched letters in my journal... shown below: 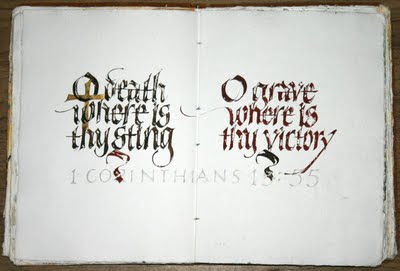 This text and the feel was the direct result of a dim recollection of another layout that I had seen years ago (I believe it was in the Speedball textbook?)... also (I know now) done by Michael. As I look at his more skillful and refined version (below), I marvel at his eye and his sense of space and design. 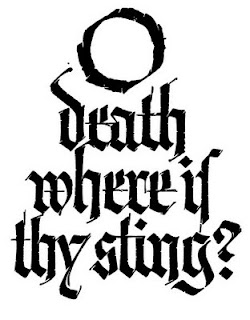 I have had many wonderful teachers throughout my Calligraphic journey, each contributing in his or her own way to my art... Michael Clark is one of those rare teachers who holds nothing back and is generous with his time and his articulation of his art. He is one who doesn't care so much about following rules, but the end result of seeing a student "make the letterform his own". For this I am grateful.
Michael, for a time, took quite a sabbatical from teaching to raise his family. I believe he is available to teach a little more readily now. For intermediate and advanced lettering artists, I would highly reccommend him for your course of study!
Notes: all images above used by permission.
Michael is the author of a new book: "Letters: The Hows and Whys of What We Do & How I Do It". This is Michael's fourth book. (His first three are sold out.) It can be found here: http://www.johnnealbooks.com/prod_detail_list/30
For more information on Michael Clark and his work, or to contact him about availibility to come treach for your guild, please visit his website: http://www.typerror.com/current6/index.html
Note:
*The "Textura" letterform goes by a few different names, the most easily recognizable being "Old English" or "gothic", also "blackletter". Both the terms "textura" and "balckletter" refer to the appearance of the density of the text in a page of writing.
Posted by Randall M. Hasson at 6:26 AM