There is a time I think, in all of our lives that we go thru a spiritual crisis or questioning phase... whether you have a "faith" or have rejected one (or many).

There comes a point where you think you have "heard it all before" or, more apporpriately, it just doesn't seem "fresh" anymore. At the time I began this journal, I was in that place. My brother came along one day and as we were discussing this, he mentioned that I should read Brennan Manning. I said "who is he?", and he replied that Brennan Manning is an alcoholic-married-catholic-priest who writes about Grace.

Well that kinda hooked me. He had a copy of the "Ragamuffin Gospel" by Manning that I promptly stole. 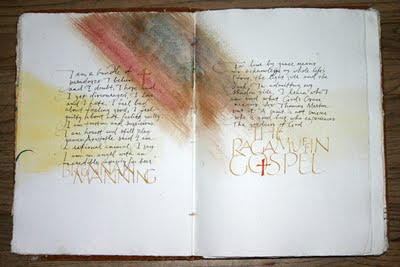 Manning is one of those writers who came along at the right time for me. He is an Irishman who has that lilting cadence and his writing style is as if he is speaking to you not composing a sentence. Here in this period of my life, this was a pivot-point; I was undergoing a paradigm shift spiritually. Through his writings, my view of my personal and loving God changed and gave me something extremely valuable: Freedom in my faith.

We are encouraged spiritually to "live in the Light", while reality dictates that this is a difficult proposition. The page illustrated above highlights a passage from Manning's book about paradoxes...

"I am a bundle of paradoxes. I believe and I doubt, I hope and I get discouraged, I love and I hate, I feel bad about feeling good, I feel guilty about not feeling guilty, I am trusting and suspicious, I am honest and still play games. Aristotle said I am a rational animal, I say I am an angel with an incredible capacity for beer! To live in Grace means to acknowledge my whole life's story, the light side and the dark. In admitting my shadow side, I learn who I am and what God's Grace means. As Thomas Merton said, "A saint is not someone who is good but who experiences God's goodness". "

The page above is a simple visual illustration of the paradoxical concept. The page immediately preceeding this one dealt with the "be transformed by the renewing of your mind" concept. So, on this page spread, I have illustrated the "light" from that previous page and also a shadowy area as well. As a visual paradox, the text is back in the "boxes" that we have just "broken out of" in the three previous page spreads. Also, I didn't want to write these words in "calligraphy', preferring simply to write them... the act of writing words like this causes me to "apprehend" them more than just reading them.

I am not a big seminar goer, but later I was to attend a weekend series to hear Brennan Manning speak. My notes were in written in a journal spontaneously and will be discussed in a later series...
Posted by Randall M. Hasson at 5:33 AM