Evolution of a Portrait: Holly in Headwrap 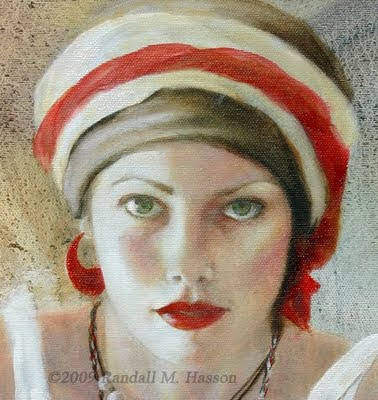 After an extensive project which involved Hebrew Lettering (which I do not read), I decided to take a so-called lettering break and do some portraiture in oils. Because I normally paint in acrylics whenever lettering will be involved, this medium is a stimulating and exciting new venture and challenge for me.

One of the artists with whom I am privileged to share the gallery is Marileigh Schulte. Marileigh is a phenomenal painter who came out of the fashion industry. My daughter Holly is one of her favorite models, and Marileigh was kind enough to give me a disk with about 300 photos of Holly in all kinds of different costume. Not only does the camera love Holly, but this woman REALLY knows how to use one! (To give you an idea, when I want to paint a model, I take probably 100 photographs to get about 5 or so that I can paint from… Marileigh gave me 300 photos and I narrowed it down to 100!) 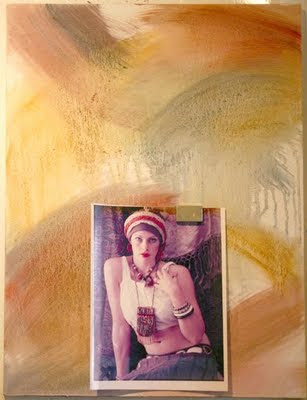 I like the wash effect that I get from acrylics, so I decided to work with the oils in that fashion as well for my background. 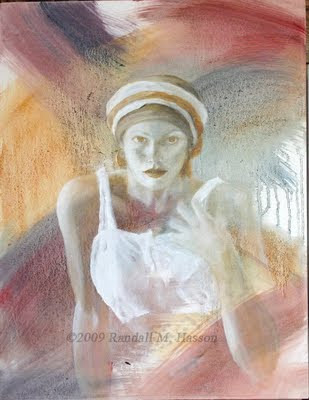 The first stage for me is simply light and shadow. Above I have rendered the model with mainly white coupled with a bit of sienna. I like to work pretty thin so that the background shows thru in areas. 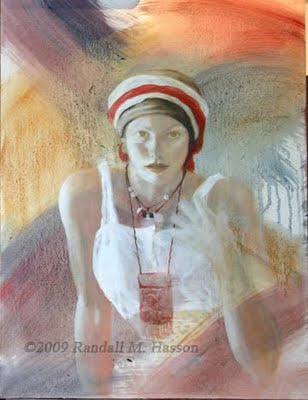 Next stage is to begin to add the darks and paint in the necklace. Wanted to get some red on there too as you can see... 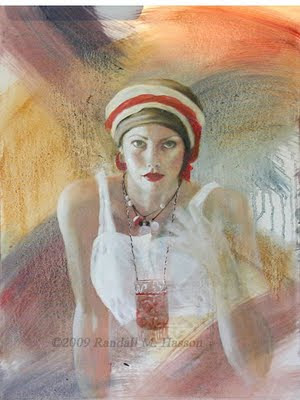 I almost never get the face correct with a sketch, and even if I were to get it right, I still must then get the light and shadow correct. Frankly I could TRACE the darn thing and still have as many minute adjustments probably as what I normally have when I paint. In the stage above, structurally, I had to narrow the set of the eyes and also narrow slightly the width of the face. This is always the hardest day (or days) for me... so many minute adjustments, and sometimes it actually take me a couple of days to get it right... sometimes looking at a painting with "fresh eyes" after taking a day or two away helps me to see what is off. 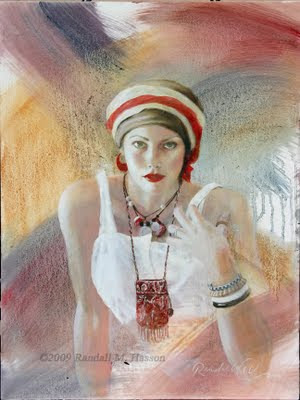 Final stage was to finish the hand (hands can be weird looking!), and add bracelets and finish rendering the necklace and that purse looking thingy that hangs from her neck.

People ask me all the time, how do you know when a painting is done? This particular painting was very interesting because at almost every stage, I had people who came into the gallery telling me that they liked it "just as it is". There was/is something pretty ethereal about this particular piece.

Another strange thing is that I have had, over the past week, at least five people tell me that the painting seems more real to them than the picture. I believe that these reactions are because of compositional focus... my aim was to have the focus directly in the eyes... and having everything else in the real photograph in full focus probably detracts from that. My goal from the beginning was to "fade out" or merge the rest of the figure with the background. Because you cannot get away from "those eyes", I think a viewer is lead into a, perhaps, more intimate or compelling interaction with the painting...