The process of a traditional (?) calligraphic layout 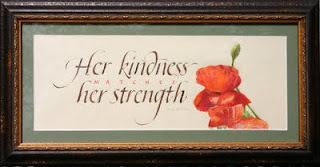 In my previous post: "Calligraphy Gone Wrong", I discussed the mechanics of rhythm (or the lack of it) in the piece I posted below. (You can click on the image above to enlarge)

I had quite a few comments from the lettering artist community, including one from my friend Doug Boyd who asked me "why did you choose italic for this piece". His further comments:

I asked because I have always believed that the choice of lettering style should help to help and support the intent of the message. Something I have tried to apply (not always successful), is the comment on Neugebauer's "mode of operation"...."He analyzed the texts he was to write, got as near as possible to the intention of the author and then made it visible on paper" Diane Hoare says, "calligraphy should help us see what we are reading by making the words beautiful" Sometimes while italic is a good standard that will serve us well in most cases it does not always achieve the above.

When I lived near Doug we would frequently get together and talk about the "theory" of what each of us were doing. I thought this might be a good springboard for a discussion of the development of a piece of lettering art and the design decision process.

My wife came to me with a quote she wanted to do for a friend. Because she knows the friend well, and has a particular piece of calligraphy that she wanted it to sorta look like, I was forced to work with the "commissioner's" demands. What she really wanted was a simple piece, done in an italic style hand, and with a bit of an illustration to make it "simple and pretty".

Of course, I as the calligrapher know MUCH better than she how to go about the process... don't I?! When I initially received this quote, I immediately sat down to do some rough drafts, detailed in the images below. Here the words "kindness" and "strength" are articulated more along the lines of the Friedrich Neugebauer quote... I am trying to articulate visually the feeling of those two words. 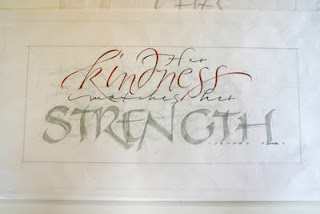 There are a couple of problems with the above layout; one is that the quote says that the kindness "matches" the strength, and in the above layout the two words certainly don't "match". Second is that the woman that this piece is intended for usually has her "strength" emphasized before her kindness and we wanted to de-emphasize that.

I took a look at vertical layouts, which frankly I really liked because it made the words a bit harder to read and made all the letters (in my versions) about the same size. I figured that if the woman was going to hang it on her wall maybe it would be better more calligraphically designed... maybe she wouldn't necessarily want some visitor to read this (easily) about her... so maybe a little harder to read for someone who is a humble individual when it comes to personal accollades... 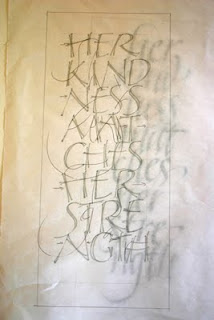 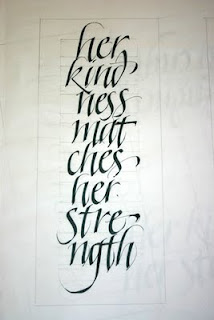 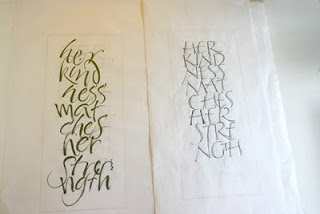 Of course the "commissioner" (who had a simple and pretty layout in mind to begin with) wasn't going for those.

I then picked up different tools and began to just letter to see what may work for me on this piece... 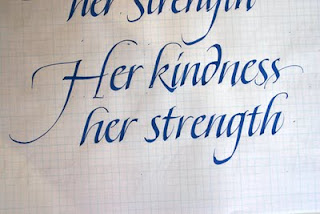 In the end I had my pile of trials. The process in this particular case is summed up by a well-known quote of T.S. Eliot:

We shall not cease from exploration, and the end of all our exploring will be to arrive where we started and know the place for the first time. 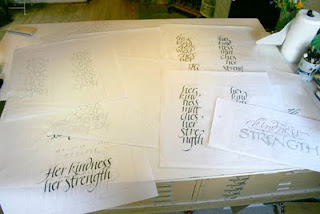 So... going back to my earlier version, I decided just to clean up the lines a bit, unify the lettering and go with the commissioner's wishes. 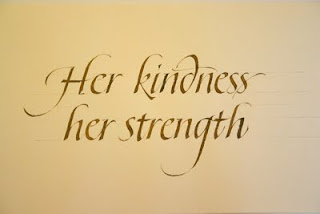 The above was done with walnut ink on Zerkal's paper, called here in the U.S. "Niddigan".

One other thing about this lady (for whom the piece is intended) is that her husband is a Master Gardner, and he had, from the plants he works with, developed a particular Poppy that he named after her. I was informed of this of course about halfway through the process of layout and design... so another reason for a simple and straightforward treatment... the lettering cannot be too busy for the illustration I am now going to include...

This illustration is done in colored pencil. Now all that is left is to add the word "matches" and a small credit line...